Nothing completes a calendar year like a good top 10 list.  In reading recent lists concerning top 10 stories around social media in 2009, no one can dispute the growth of Twitter, Facebook or even simply overall online interactivity.  While we can’t ignore how Ashton Kutcher, CNN, Oprah, Michael Jackson, Iran, or the iPhone were in the news, here are the top 10 stories of our own Lehigh Valley which concerned social media.  Enjoy!  Many people brought forward these top 10 based on input from Twitter, Facebook and LinkedIn over the last 48 hours.

10. The Bookstore is Exposed

There was talk of this new bar opening up on the Southside of Bethlehem and no one really knew what to expect.  Low and behold, as people made there way in to explore, they talked about it on Twitter and word got out.  The Speakeasy motif was unique and somehting new – a perfect candidate for social media buzz.  The following tweet proves it. By the way, the next @LVTweetup will be at the Bookstore 7-9pm on January 14th, preceeded by Wine and Cheese at @HomeAndPlanet from 6-7pm.

Friday December 4, the Lehigh Valley saw President Obama fly into LVIA on Air Force One, stop at Allentown Metal Works manufacturing facility, speak at Lehigh Carbon Community College, and eat at the Hamilton Family Restaurant in Allentown.  Through the eyes of the media as well as everyday tweeps and Facebook profiles, we felt like we were there on the runway, in the auditorium, and at the diner.  You could smell the eggs cooking.

Many people are “nationally known and locally obscure”, but not when you are on Twitter or Facebook and identify in your bio you are from Bethlehem, Allentown or other Lehigh Valley cities.  You just can’t hide anymore.  Such is the case with two people we would not have heard of or even met if social media wasn’t around.  Two such people, Cindy Ratzlaff (@BrandYou) and Anne Coleman (@CookingWithAnne).

Cindy has developed the marketing and publicity campaigns for more than 150 New York Times bestselling books in her career at Rodale. She was named to the Ad Age Marketing 50 list for her blockbuster campaign launching The South Beach Diet.  After being laid off, Cindy is now a founding member of the International Social Media Association and is one of the first twenty Certified Social Media Strategists in the world.

Anne is a “mother of 7 children and wife to one man”. Her kids range in age from 2 years to 20 years.  In July 2005, she started a blog, Cooking with Anne, that began as a chronicle of her food life at home.  By January 2006, her blog won a Best of Blogs award for Best Food Blog. in November 2006, she was contacted by the Walt Disney Internet Group and asked to write for them at Family.com as Short Order Mom on their blog Cookies to Caviar.

Earlier this year, a Facebook group was developed to save the Lehigh Valley Zoo.  Within a month, 2506 Facebook users joined and it even raised over $800 in a few short hours also with an online campaign on the group page. It can be found at http://www.facebook.com/group.php?gid=43879323058.  Have a look! 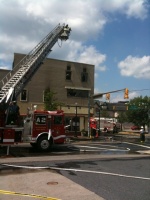 I remember driving to St. Luke’s Hospital for an X-ray when as I was turning I saw smoke from the Southside. While in the ER, I turned to Twitter and found out the Southside Burger Company building had caught fire.  Everyday people were lined up at the gas station across the street taking pictures, texting and Tweeting.  News broke on Twitter and such faster than the typical media got a hold of it.  @MOB514, a Southside resident, was there to also capture details as they came out from the early morning sirens to the eventual demolition of the building.

Over 100+ people came to City Hall in support of the Skatepark due to social media outreach. Source: HomeBase 610 blog

A proposal to pull the grant funding from the Bethlehem Skateplaza was to be brought to the City Council so when Andy Po (@homebase610) found out he got on Twitter he rallied support to keep the funds in place.  the people responded and they got 100+ young residents, parents and business owners through social media who supported the skateplaza to stand by city hall in support of its completion.   The town responded, the City listened and the skateplaza will now be breaking ground early in 2010. Check out the full story as told by Homebase Skateshop owner Andy Po at http://homebase610.com/?p=3497.

4. Geo-location, Mayors and Places to be..

There is no doubt that what you are doing and what is on your mind is what made social media a focal point in 2009, but more and more it is where you are at as well.  Applications like FourSquare and GoWalla came onto the scene and integrated where you are into what you are doing.  Fully integrated into tools like Twitter and Facebook, the adoption of these tools grew.  They are now available not only on the iPhone, but on the Droid and now Blackberry as well.  As use of these tools started, automated Tweets from the applicatoin itself spread about being Mayor of all these establishments where people were going (having been there at least 2 times in 2 months and continuing to be a frequent visitor, moreso than others made you Mayor).  This created a little friendly competition, as well as satire (talk of #fivesquare, being mayor of your house, and other fictional establishments) and ridicule.   Like it or not, it is here to stay, and you will probably see more of it in 2010. 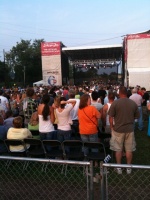 MusikFest has been around since 1984 but there was so much buzz around MusikFest online this year, it was almost like you could be there while just looking at your phone.  Twitter and Facebook saw contests, reviews, musical acts, photos, and more all centered around this August event.  Concert tickets were given away, vendors were given the thumbs up (or thumbs down), “wish you were here” pictures flooded online for that whole week.  You could almost tasted the brushed on butter of AwShucks corn as you read what and where people were at MusikFest.  Even the Mullet Count hanging from Spark‘s windows were pushed out to the Twitter users who weren’t there in person to keep track of it.

It’s one thing to talk to your friends online about what you ate for dinner, how your co-worker said something annoying.  It’s also another when you are shopping and the sales people just won’t leave you alone.  Many folks don’t wanna constantly hear about your latest special, or limited quantities, or how you need this NOW.. and buy, buy, buy, buy, blah, blah, blah.  Well, we did see a lot of that online this year, the past years and you will continue to see it in the future, sorry folks!  However, some folks do it right by engaging social media to promote and advertise their business but do it tactfully and by considering the human factor of it all.  They are involved in the community and establish themselves as business leaders and it made their message stick a lot better.  Many local consumers advocate “#buylocal” and Twitter and Facebook had the pick of the litter to choose from.  Businesses like Hosfeld Insurance (@HOSFELDInsuranc) and Black Forest Deli (@BlackForestDeli) are people we got to know online not just for their businesses but as people too.   The rumor is that the hottest sandwich in the second half of 2009 at Black Forest Deli was the MOB, named after Michele of Bethlehem (@MOB514) on Twitter.  What is on a MOB?  It’s a triple decker sandwich with turkey, crispy bacon, avocado, honey mustard, tomatoes and lettuce.  Am I making you hungry?

The growth of blogging locally also came into the fold in 2009.  Three that really took advantage of social media were Lehigh Valley with Love (@LVwithLove) [may be NSFW], LV Scene (@lvscene) and the newest blog The El Vee (@theelvee).  If you haven’t already, check them out.

1. Tweetups for Community and Charity

The @LVTweetup received the most votes by the Twitter, Facebook and LinkedIn community in our poll.  There were 8 Tweetups this past year in the Lehigh Valley.   April 13, 2009 was the first one at Allentown Brew Works.  We gave away T-shirts to the 30-some folks that came out that night and took a chance.  Since then there have been 8 total in Easton, Bethlehem, and Orefield.  Many business sponsors kicked in money, food and more, and we gave away t-shirts, beer mugs, golf balls, and sweatshirts throughout the year.  At our December Tweetup at Bethlehem Brew Works, we had over 100 attendees (see our Twitter list for who came), collected a large box of toys for Toys for Tots, and over 7 boxes of canned goods for the Trinitiy Soup Kitchen all in the holiday spirit.  Our silent auction raised almost $400 total for these two charities as well as some for the Lehigh Valley Zoo.

Many friendships and business networking opportunities blossomed as an outcome of these events.  Tim Fortner (@timshady) mentioned “I think of all of the off-line friendships that have been created from on-line introductions.  I’ve meet some pretty cool people that I talk on the phone with and actually hang out with.  It’s easy because you can meet people with common interests.”